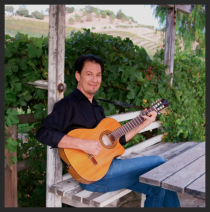 Growing up in the early 60’s, Tim Buley had the advantage of being surrounded by great music and amazing musicians. When the Beatles arrived, it inspired Tim, at the age of 12, to obsessively teach himself guitar, then keyboards at the age of 15.

Tim was introduced to American roots blues, along with British rock, which formed him into a well-rounded blues/rock guitar player by the age of 16, playing shows on Hollywood’s Sunset Strip and throughout L.A. and Ventura County.

Already playing music as his full-time profession by the age of 20, Tim had arrived as a guitarist/keyboardist - then took it one step further by replacing bass players with his bass pedal playing, all while developing his vocal ability.

Surrounding himself with incredible musicians, and perfecting his own unique style, gave Tim the ability to play niches of music that most musicians only dream of.   He can easily weave through blues, jazz, bossa nova, country, R&B, soul, reggae, and a myriad of rock stylings – and blend these styles, as well.

It may be hard to categorize Tim because he is not strictly blues or strictly jazz - or strictly anything!  Possibly the best description would be exceptionally high musicianship that is artistic, but can be simple - although never simple-minded.  Tim’s priority is to give the song what it needs - which many times is understated simplicity.  Tim says, “It’s not about how many notes you can play, it’s about getting the song across to the audience & giving it what it needs”.

Being a multi-faceted, full-time guitarist/keyboardist/vocalist for 40 years, Tim has always supported his family solely with live music.  He performs more gigs/shows/events in a year than some musicians play in 10 years.  Tim has been offered many opportunities to tour with famous musicians, however he has always remained in the Southern California area to be with son, who is autistic.

Tim Buley is the quintessential hard-working, live virtuoso musician/vocalist, with vast experience and true dedication to his craft.